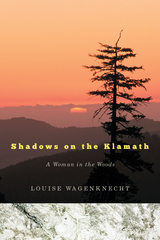 In 1973, Louise Wagenknecht was just another college graduate, but unlike many, she wanted to go home, back to the Klamath Mountains where she was raised. When a job offer from the Klamath National Forest gave her that chance, she jumped at it. She landed in the logging town of Happy Camp, where she’d spent part of her childhood, as chronicled in her previous memoirs, White Poplar, Black Locust and Light on the Devils.

With Shadows on the Klamath, Louise Wagenknecht completes her trilogy about life in remote northwestern California. In this new work, she recounts her years in the Forest Service, starting as a clerical worker on the Klamath National Forest before moving to a field position where she did everything from planting trees to fighting fires.

Her story is about a Forest Service in transition, as forest management practices began to shift. Not least among these changes was the presence of women in the ranks—a change that many in the Forest Service resisted. Wagenknecht blends the personal and professional to describe land management in the West and the people who do it—their friendships, rivalries, and rural communities.

Anyone with an interest in the Klamath-Siskiyou region, or the history of women in natural resource agencies, or the many issues associated with industrial forestry, should read this book for its valuable firsthand perspective. General readers interested in the rural West and personal memoir will also be richly rewarded.

AUTHOR BIOGRAPHY
LOUISE WAGENKNECHT was born in Boise, Idaho, and raised near the Klamath River in northwestern California. She graduated from California State University, Chico with a degree in English, and studied range, botany, forestry, and wildlife management at Humboldt State University. She worked for the US Forest Service for more than thirty years and has been widely anthologized. She lives in Idaho.
TABLE OF CONTENTS
Contents
Acknowledgments
Part I
1. Line and Staff
2. Silviculls
3. Strangers in the Forest
4. All the Waters Run South
5. Herbicides
6. Alice
7. Put Me In, Coach
8. The Class of ’78
9. Breaking Up
10. Out of the Frying Pan
Part II
11. Luke Skywalker vs. Darth Plumbing
12. We Survived the Five
13. A Journey to the Coast
14. Herbicides Redux
15. The Man in Joe Sino’s House
16. The Red Queen’s Race
17. Klamath Weed
18. Crew Boss
19. Years of the Ski
20. Nigel
21. Getting Out
22. Looking Back
23. Burning Tom Martin’s
24. Moving On
25. Epilogue
Sources