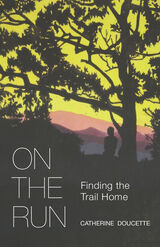 Catherine Doucette is a backcountry skier, horseback rider, and mountaineer—roles that have resulted in adventures where she is often the only woman in a group of men. Starting from a young age, she pushed through the wilderness with her brothers, friends, and partners, gaining the skill and judgement to tackle progressively bigger goals until she became an accomplished outdoorswoman.

For over a decade, Doucette chased winter around the world to ski, from the White Mountains of her native New Hampshire to the slopes of Alaska, British Columbia, California, Argentina, Switzerland, and beyond. But she always kept one eye toward living a more settled life and putting her heart on the line if someone would just ask her to. Like other women who choose or yearn to be in the wilderness, she wrestled to reconcile her outdoor ambitions with society’s expectations of women.

The personal essays collected in On the Run touch on the author’s origins in New Hampshire while focusing on the lure of big mountains in the West. They celebrate the comfort, challenge, and community found in expanses of wilderness while confronting the limitations and sacrifices that come with a transient, outdoor lifestyle. In a voice both searching and deeply grounded, Doucette contends with avalanches and whitewater along with the less dramatic but equally important questions of belonging. Anyone who has searched to define home, who has been called by mountains, or by movement, will feel at home in these pages.
AUTHOR BIOGRAPHY
Catherine Doucette grew up in the White Mountains of New Hampshire, where her passion for the outdoors was kindled at home and at The White Mountain School. She is an avid skier, runner, horseback rider, and hiker. Her writing ambitions were sparked at St. Lawrence University, and she went on to earn an MFA from Oregon State University. She currently calls Pennsylvania home, where she writes in the shadow of Hawk Mountain.
catedoucette.com
TABLE OF CONTENTS
Contents
Acknowledgments
When the Lake Makes Ice
In the Church of the Atavists
One of the Boys
Versions
Into the Bite
The Weight of Healing
Herd Animals
Close
Beyond the Viewfinder
Roots
Recurring California Dreams
Swimming
On the Run
Thru Traffic
Stability
Fieldstone
Moving