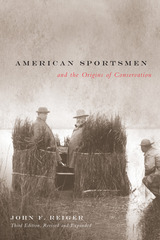 American Sportsmen and the Origins of Conservation, 3rd Ed
by John F. Reiger
Oregon State University Press, 2001
Paper: 978-0-87071-487-0
Environmentalists who believe that hunters and anglers are interested only in the kill and the catch may be surprised to learn that sportsmen were originally in the vanguard of the conservation movement. John Reiger's work has been hailed as an authoritative look at these early conservationists; now his landmark book is available in an expanded edition that broadens its historic sweep.

Beginning in the 1870s, sportsmen across America formed hundreds of organizations that not only fostered responsibility for game habitats but also spearheaded the creation of national parks, forests, and wildlife refuges. Reiger tells how these "gentlemen" hunters and anglers, outdoor journals like Forest and Stream, and organizations such as the Boone and Crockett Club—founded by Theodore Roosevelt, George Bird Grinnell, and other prominent sportsmen—lobbied for laws regulating the taking of wildlife, and helped to arouse public interest in wilderness preservation.

In this new edition, Reiger traces the antecedents of the sportsmen's conservation movement to the years before the Civil War. He extends his coverage into the present by demonstrating how the nineteenth-century sportsman's code—with its demand for taking responsibility for the total environment—continues to be the cornerstone of the sporting ethic. A new Epilogue depicts leading environmental thinker Aldo Leopold as the best-known exponent of this hunter-conservationist ideal.

Praised as "one of the seminal works in conservation history" by historian Hal Rothman, Reiger's book continues to be essential reading for all concerned with how earlier Americans regarded the land, demonstrating even to those who oppose hunting that they share with sportsmen and sportswomen an awareness and appreciation of our fragile environment.
AUTHOR BIOGRAPHY
John F. Reiger is Professor of History at Ohio University-Chillicothe and the former Executive Director of the Connecticut Audubon Society. His other books include The Passing of the Great West: Selected Papers of George Bird Grinnell and "Gifford Pinchot with Rod and Reel"/"Trading Places: From Historian to Environmental Activist"—Two Essays in Conservation History.