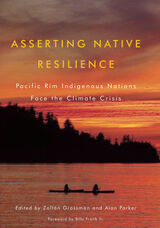 Indigenous nations are on the front line of the climate crisis. With cultures and economies among the most vulnerable to climate-related catastrophes, Native peoples are developing twenty-first century responses to climate change that serve as a model for Natives and non-Native communities alike.

Native American tribes in the Pacific Northwest and Indigenous peoples around the Pacific Rim have already been deeply affected by droughts, flooding, reduced glaciers and snowmelts, seasonal shifts in winds and storms, and the northward movement of species on the land and in the ocean. Using tools of resilience, Native peoples are creating defenses to strengthen their communities, mitigate losses, and adapt where possible.

Asserting Native Resilience presents a rich variety of perspectives on Indigenous responses to the climate crisis, reflecting the voices of more than twenty contributors, including tribal leaders, scientists, scholars, and activists from the Pacific Northwest, British Columbia, Alaska, and Aotearoa / New Zealand, and beyond. Also included is a resource directory of Indigenous governments, NGOs, and communities and a community organizing booklet for use by Northwest tribes.

Zoltán Grossman is a professor of Geography and Native American and World Indigenous Peoples Studies at The Evergreen State College in Olympia, Washington.

Alan Parker, a citizen of the Chippewa Cree Tribal nation and Professor of Advanced Studies in Tribal Governments, is executive director of the Northwest Indian Applied Research Institute at The Evergreen State College.