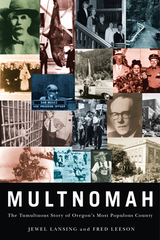 Covering people and events from 1854 to the present day, this definitive history of Multnomah County provides compelling details about public works triumphs and political scandals.

Founded as a convenience so residents of the fast-growing city of Portland wouldn’t have to ride by horseback to Hillsboro, Oregon’s tiniest county geographically soon grew to be the state’s most populous.  Through nearly sixteen decades, Multnomah County’s history seldom has been calm and peaceful.  From hangings that turned into grim public spectacles in the nineteenth century to a glaring failure to deal with urban growth in the middle of the twentieth, the county survived several attempts to revamp its structure or merge with Portland’s better-known municipal government.

Highlighted episodes include the construction of the iconic Columbia River Highway between 1914 and 1918, the tragic flooding of Vanport City in 1948, the employee strike of 1980, the library scandal of 1989-1990, and the same-sex marriage license debacle of 2004.

Historian Jewel Lansing and journalist Fred Leeson make effective use of archival sources, oral histories, newspaper articles, and personal interviews to create the definitive reference on Multnomah County history, politics, and policy. History buffs and informed Portland citizens will be particularly engaged by the regional trivia and narrative details.
AUTHOR BIOGRAPHY
JEWEL LANSING is the author of Portland: People, Politics, and Power, 1851-2001. She is a member of the Center for Women, Politics, and Policy at Portland State University and one of the founders of WINPAC (Women’s Investment Network Political Action Committee), an organization dedicated to helping elect progressive women candidates to the Oregon legislature.
FRED LEESON is a freelance journalist and adjunct professor of journalism at Concordia University in Portland. He reported on Multnomah County government for The Oregon Journal and The Oregonian. He is the author of Rose City Justice: A Legal History of Portland, Oregon.