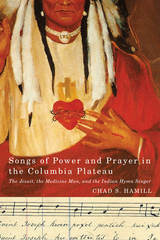 In Chad Hamill’s narrative, a Jesuit and his two Indian “grandfathers”—one a medicine man, the other a hymn singer—engage in a collective search for the sacred. The priest becomes a student of the medicine man. The medicine man becomes a Catholic. The Indian hymn singer brings indigenous songs to the Catholic mass. Using song as a thread, these men weave together two worlds previously at odds, realizing a promise born two centuries earlier within the prophecies of Circling Raven and Shining Shirt.

Songs of Power and Prayer reveals how song can bridge worlds: between the individual and Spirit, the Jesuits and the Indians. Whether sung in an indigenous ceremony or adapted for Catholic Indian services, song abides as a force that strengthens Native identity and acts as a conduit for power and prayer.

CHAD S. HAMILL is an assistant professor of ethnomusicology at Northern Arizona University, where he serves as Co-Chair for the Commission for Native Americans. Of Spokane and non-Indian descent, he has also served as Associate Director of the Plateau Center of American Indian Studies at Washington State University.