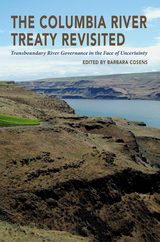 The Columbia River Treaty, concluded in 1961 and ratified in 1964, split hydropower and flood control regulation of the river between Canada and the United States. Some of its provisions will expire in 2024, and either country must give ten years’ notice of any desired alteration or termination.

The Columbia River Treaty Revisited, with contributions from historians, geographers, environmental scientists, and other experts, is intended to facilitate conversation about the impending expiration. It allows the reader, through the close inspection of the Columbia River Basin, to better grasp the uncertainty of water governance. It aids efforts, already underway, to understand changes in the basin since the treaty was passed, to predict future changes, and to determine whether alteration of the treaty is ultimately advisable.

A Project of the Universities Consoritum on Columbia River Governance
The Universities Consortium on Columbia River Governance, with representatives from universities in the U.S. and Canada, formed to offer a nonpartisan platform to facilitate an informed, inclusive, international dialogue among key decision-makers and other interested people and organizations; to connect university research to problems faced within the basin; and to expose students to a complex water resources problem. The Consortium organized the symposium on which this volume is based.
AUTHOR BIOGRAPHY
Barbara Cosens is a professor at the University of Idaho College of Law and a faculty member of the Waters of the West Program. She represents the University of Idaho on the Universities Consortium on Columbia River Governance.  Her research interests include the integration of law and science in water resource management and dispute resolution, water management and resilience, and the recognition and settlement of Native American water rights.