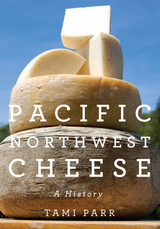 In this rich and engaging history, Tami Parr shows how regional cheesemaking found its way back to the farm. It’s a lively story that begins with the first fur traders in the Pacific Northwest and ends with modern-day small farmers in Oregon, Washington, and Idaho.

For years, farmers in the Pacific Northwest made and sold cheese to support themselves, but over time the craft of cheesemaking became a profitable industry and production was consolidated into larger companies and cooperatives. Eventually, few individual cheesemakers were left in the region. In the late sixties and early seventies, influenced by the counterculture and back-to-the-land movements, the number of small farms and cheesemakers began to grow, initiating an artisan cheese renaissance that continues today.