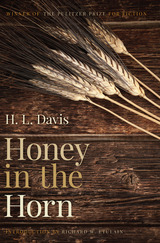 Set in Oregon in the early years of the twentieth century, H. L. Davis’s Honey in the Horn chronicles the struggles faced by homesteaders as they attempted to settle down and eke out subsistence from a still-wild land. With sly humor and keenly observed detail, Davis pays homage to the indomitable character of Oregon’s restless people and dramatic landscapes without romanticizing or burnishing the myths.

Clay Calvert, an orphan, works as a hand on a sheep ranch until he stumbles into trouble and is forced to flee. Journeying throughout the state, from the lush coastal forests, to the Columbia Gorge, to the golden wheat fields east of the Cascades, he encounters a cast of characters as rich and diverse as the land, including a native Tunne boy and a beautiful girl named Luce.

Originally published in 1935, Honey in the Horn reveals as much about the prevailing attitudes and beliefs of H. L. Davis’ lifetime as it does about the earlier era in which it is set. It transcends the limitations of its time through the sheer power and beauty of Davis’ prose. Full of humor and humanity, Davis’s first novel displays a vast knowledge of Pacific Northwest history, lore, and landscape.

ABOUT THIS BOOK | TOC | AWARDS