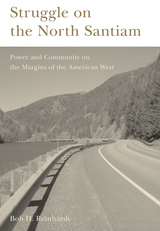 A sixty-mile forested corridor dotted with small towns, stretching from the Willamette Valley to the Cascade mountains, Oregon’s North Santiam Canyon is like many other marginalized places in the American West. Its residents have long sought to exercise limited power in the face of real and exaggerated external forces: global economic systems, cultural power emanating from larger cities, and political forces in the form of state and federal government agencies. Struggle on the North Santiam examines how these Oregonians have responded to, interacted with, and sometimes gotten the better of such external forces.

In this deeply researched account, historian Bob H. Reinhardt connects the North Santiam Canyon’s history to that of the Pacific Northwest and the United States more broadly. Readers will learn about specific events that illuminate themes in the region’s history: railroad development as seen through the failed dreams of the Oregon Pacific Railroad, federal land scams in the Oregon land fraud trials of the early twentieth century, the causes and consequences of mid-century river development projects like Detroit Dam, the post-war booms and busts of the timber industry, the spotted owl/ancient forest debate in the 1980s and 1990s, and the promises and perils of Oregon’s recreational tourism economy.

From nineteenth-century interactions between Native and non-Native peoples to the changing fortunes of the timber industry and questions about economic and environmental sustainability in the twenty-first century, the book offers important insights into power dynamics in small communities and marginal places. Struggle on the North Santiam will be of interest to scholars of the American West and thoughtful readers interested in Oregon and Pacific Northwest history.
AUTHOR BIOGRAPHY
BOB H. REINHARDT is an assistant professor in the department of history at Boise State University, where he teaches, researches, and writes about the history of the American West, environmental history, public history, and the history of public health. He earned a PhD from the University of California, Davis, an MA from the University of Oregon, and a BA from Willamette University. He served as the executive director of the Willamette Heritage Center, held a postdoctoral fellowship at Carnegie Mellon University, and taught at Western Oregon University and Willamette University. Bob is also the founder and director of Boise State University’s Working History Center.
TABLE OF CONTENTS
Contents
Acknowledgments
Introduction
1. Making Homes, Profits, and Paths in the North Santiam Canyon
2. Railroad, Fraud, and Complicity in the Canyon
3. Living and Working around the Hammond Lumber Company
4. The Great Depression in the Canyon
5. The Highway and the Dam
6. Becoming a Timber Community
7. Environmentalism and Tourism in the Canyon
Epilogue
Notes
Bibliography
Index