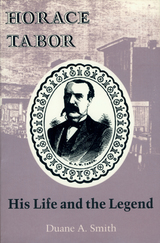 BUY
Horace Tabor: His Life and the Legend
by Duane A. Smith
University Press of Colorado, 1989
Paper: 978-0-87081-206-4
Horace Tabor: His Life and the Legend is the first biography to give full attention to Tabor's mining, business, and political activities as well as to his matrimonial escapades. It is a careful and detailed portrait of a man so extraordinary that even in his own lifetime the facts were largely obscured behind the legend. Rarely has the Victorian American West, both good and bad, been better synopsized in the figure of one man.Show More an.Show Less

An 1858er who had spent nearly two decades following the will-o-the-wisp Colorado mining frontier, in 1876 Tabor was then living and working in out-of-the-way Oro City, near where Leadville would be one day. Soon thereafter came the Little Pittsburg silver strike, and Tabor's fortune took flight. Very quickly, Colorado - and the rest of the nation - was hearing about Horace Tabor. "Denver's lucky star was on high when Governor Tabor decided to spend his fortune here," praised the Denver Tribune in 1881. The Leadville Daily Herald (July 8, 1882) also understood his contribution: "Colorado has produced fortunes for many men, but no man who has met with success has so freely made investments in this state, as has Governor Tabor."

The events that followed that amazing silver discovery on Fryer Hill, May 1878 unfolded like a classic Greek tragedy. Tabor weathered them all, and his name has resounded through the succeeding decades. No other Coloradan of his generation is so well remembered, nor does anyone else so typify the tempo of this legendary mining era.

AUTHOR BIOGRAPHY
Duane A. Smith is a professor of history at Fort Lewis College in Durango, and is the author or coauthor of more than fifty books on Colorado and the West. He also serves as chair of the Durango Parks and Forestry Board and on the Anima School House Museum Board.