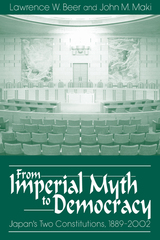 BUY
From Imperial Myth to Democracy: Japan's Two Constitutions, 1889-2002
by Lawrence W. Beer and John M. Maki
University Press of Colorado, 2002
Paper: 978-0-87081-686-4
While English-language studies of Japanese law have enjoyed remarkable growth in the past half-century, scholars have given only scant attention to the broad sweep of Japan's constitutional history. Deftly combining legal and historical analysis, Lawrence W. Beer and John M. Maki contrast Japan's two modern-era constitutions - the Meiji Constitution of 1889 and the Showa Constitution of 1947. Moving beyond a narrowly focused study of the documents themselves, Beer and Maki present these constitutions as key to understanding differences in Japanese society and politics before and after World War II. Their clear and fluid presentation makes this an engaging and approachable study of not only constitutional law but also this remarkable period in Japanese history.
REQUEST ACCESSIBLE FILE