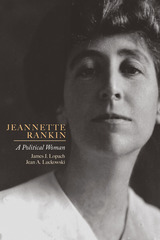 Jeannette Rankin, the first woman elected to Congress, stands tall among American icons. The representative from Montana won her seat at a time when women didn't have the right to vote in most states. Her firm stances inspired both admiration and fury across party lines, and she gained nearly canonical status among feminists and pacifists. In Jeannette Rankin: A Political Woman, James Lopach and Jean Luckowski demythologize Rankin, showing her to be a talented, driven, and deeply divided woman.

Until now, no biography has explored Rankin's inconsistencies. The authors extensively consulted the correspondence of her family members and contemporaries, uncovering ties between her politics and her familial and personal relationships. They reveal how she succeeded through her wealthy brother's influence as well as her own extraordinary efforts; how she drew inspiration not from her rural roots but from the radical hotbed of Greenwich Village; and how she championed an independent, woman-centered life while deferring to family.

Revealing her complexities along with her accomplishments, Jeannette Rankin: A Political Woman will be the definitive biography of this path-breaking politician for years to come.
AUTHOR BIOGRAPHY