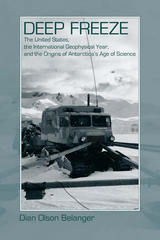 In Deep Freeze, Dian Olson Belanger tells the story of the pioneers who built viable communities, made vital scientific discoveries, and established Antarctica as a continent dedicated to peace and the pursuit of science, decades after the first explorers planted flags in the ice.

In the tense 1950s, even as the world was locked in the Cold War, U.S. scientists, maintained by the Navy's Operation Deep Freeze, came together in Antarctica with counterparts from eleven other countries to participate in the International Geophysical Year (IGY). On July 1, 1957, they began systematic, simultaneous scientific observations of the south-polar ice and atmosphere. Their collaborative success over eighteen months inspired the Antarctic Treaty of 1959, which formalized their peaceful pursuit of scientific knowledge. Still building on the achievements of the individuals and distrustful nations thrown together by the IGY from mutually wary military, scientific, and political cultures, science prospers today and peace endures.

The year 2007 marked the fiftieth anniversary of the IGY and the commencement of a new International Polar Year - a compelling moment to review what a singular enterprise accomplished in a troubled time. Belanger draws from interviews, diaries, memoirs, and official records to weave together the first thorough study of the dawn of Antarctica's scientific age. Deep Freeze offers absorbing reading for those who have ventured onto Antarctic ice and those who dream of it, as well as historians, scientists, and policy makers.