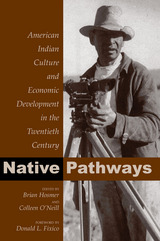 How has American Indians' participation in the broader market - as managers of casinos, negotiators of oil leases, or commercial fishermen - challenged the U.S. paradigm of economic development? Have American Indians paid a cultural price for the chance at a paycheck? How have gender and race shaped their experiences in the marketplace? Contributors to Native Pathways ponder these and other questions, highlighting how indigenous peoples have simultaneously adopted capitalist strategies and altered them to suit their own distinct cultural beliefs and practices. Including contributions from historians, anthropologists, and sociologists, Native Pathways offers fresh viewpoints on economic change and cultural identity in twentieth-century Native American communities. Foreword by Donald L. Fixico.
AUTHOR BIOGRAPHY
Brian Hosmer is associate professor of history and American Indian studies at the University of Illinois at Chicago and director of The Newberry Library's D'Arcy McNickle Center for American Indian History. Colleen O'Neill is associate professor of history at Utah State University and associate editor of Western Historical Quarterly.
TABLE OF CONTENTS