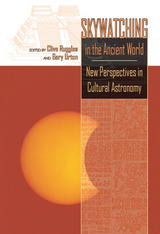 Compiled in honor of Anthony F. Aveni, America's leading archaeoastronomer, Skywatching in the Ancient World offers state-of-the-art work in cultural astronomy by well-known experts in Mayan glyphic studies, cultural history, ethnohistory, and the history of science and of religions.

This collection's wide range of outstanding scholarship reveals that cultural astronomy has come into its own. The diverse topics addressed by the contributors include the correlation between Colonial Northern Zapotec and Gregorian calendars, the period of use of the Dresden Codex Venus table and the significance of the Lunar Almanacs that precede it, a new interpretation of an Inka tapestry mantle as a commemorative calendar, temple orientations in Hawai'i and church orientations in Medieval England, and the connection in cultural imagery between astronomers (science) and wizards (magic).

AUTHOR BIOGRAPHY
Clive Ruggles is Emeritus Professor of Archaeoastronomy at the University of Leicester, U.K. Gary Urton is Dumbarton Oaks Professor of Pre-Columbian Studies at Harvard University
TABLE OF CONTENTS