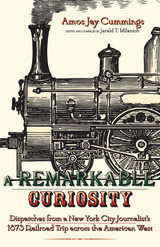 Collected in this volume for the first time are Cummings's portraits of a land and its assortment of characters unlike anything back East. Characters like Pedro Armijo, the New Mexican sheep tycoon who took Denver by storm, and more prominently the Mormon prophet Brigham Young and one of his wives, Ann Eliza Young, who was filing for divorce at the time of Cummings's arrival.

Although today he is virtually unknown, during his lifetime Cummings was one of the most famous newspapermen in the United States, in part because of stories like these. Complete with a biographical sketch and historical introduction, A Remarkable Curiosity is an enjoyable read for anybody interested in the American West in the latter half of the nineteenth century.

AUTHOR BIOGRAPHY
Curator in archaeology at the Florida Museum of Natural History and professor of anthropology and Latin American studies at the University of Florida, Jerald T. Milanich has written over twenty books and has received a number of awards, including the James Mooney Book Award, the Rembert Patrick Book Prize (twice), and the American Association for State and Local History Book Award.
TABLE OF CONTENTS