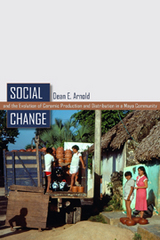 How and why do ceramics and their production change through time? Social Change and the Evolution of Ceramic Production and Distribution in a Maya Community is a unique ethno-archaeological study that attempts to answer these questions by tracing social change among potters and changes in the production and distribution of their pottery in a the Mexican community of Ticul between 1965 and 1997.

Dean E. Arnold made ten visits to Ticul, Yucatan, Mexico, witnessing the changes in transportation infrastructure, the use of piped water, and the development of tourist resorts. Even in this context of social change and changes in the demand for pottery, most of the potters in 1997 came from the families that had made pottery in 1965. This book traces changes and continuities in that population of potters, in the demand and distribution of pottery, and in the procurement of clay and temper, paste composition, forming, and firing.

In this volume, Arnold bridges the gap between archaeology and ethnography, using his analysis of contemporary ceramic production and distribution to generate new theoretical explanations for archaeologists working with pottery from antiquity. When the descriptions and explanations of Arnold’s findings in Ticul are placed in the context of the literature on craft specialization, a number of insights can be applied to the archaeological record that confirm, contradict, and nuance generalizations concerning the evolution of ceramic specialization. This book will be of special interest to anthropologists, archaeologists, and ethnographers.

AUTHOR BIOGRAPHY
Dean E. Arnold adjunct curator of anthropology at the Field Museum of Natural History in Chicago and professor emeritus of anthropology at Wheaton College in Illinois. He has taught anthropology for forty-three years; done field work in Peru, Mexico, Bolivia, Guatemala, and the Southwest; and has published three books, including the highly regarded seminal work Ceramic Theory and Cultural Process and more than sixty articles about potters, pottery, and pottery production and related subjects (such as Maya Blue). Arnold was a Fulbright Scholar in Mexico and Peru, a Visiting Fellow at Clare Hall at University of Cambridge in 1985, and a Visiting Scholar at the Department of Archeology there in 1985, 1992, and 2000. He received the Society for American Archaeology's Award for Excellence in Ceramic Studies in 1996. In 2003, he received the Charles R. Jenkins Award for Distinguished Achievement from the National Executive Council of Lambda Alpha (the National Collegiate Honor Society for Anthropology). He received the Wheaton College Senior Faculty Scholarship Achievement Award in 2001 and the Wheaton College Alumni Association Award for Distinguished Service to Alma Mater in 2008.
TABLE OF CONTENTS