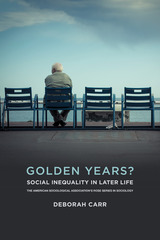 Thanks to advances in technology, medicine, Social Security, and Medicare, old age for many Americans is characterized by comfortable retirement, good health, and fulfilling relationships. But there are also millions of people over 65 who struggle with poverty, chronic illness, unsafe housing, social isolation, and mistreatment by their caretakers. What accounts for these disparities among older adults? Sociologist Deborah Carr’s Golden Years? draws insights from multiple disciplines to illuminate the complex ways that socioeconomic status, race, and gender shape the nearly every aspect of older adults’ lives. By focusing on an often-invisible group of vulnerable elders, Golden Years? reveals that disadvantages accumulate across the life course and can diminish the well-being of many.

Carr connects research in sociology, psychology, epidemiology, gerontology, and other fields to explore the well-being of older adults. On many indicators of physical health, such as propensity for heart disease or cancer, black seniors fare worse than whites due to lifetimes of exposure to stressors such as economic hardships and racial discrimination and diminished access to health care. In terms of mental health, Carr finds that older women are at higher risk of depression and anxiety than men, yet older men are especially vulnerable to suicide, a result of complex factors including the rigid masculinity expectations placed on this generation of men. Carr finds that older adults’ physical and mental health are also closely associated with their social networks and the neighborhoods in which they live. Even though strong relationships with spouses, families, and friends can moderate some of the health declines associated with aging, women—and especially women of color—are more likely than men to live alone and often cannot afford home health care services, a combination that can be isolating and even fatal. Finally, social inequalities affect the process of dying itself, with white and affluent seniors in a better position to convey their end-of-life preferences and use hospice or palliative care than their disadvantaged peers.

Carr cautions that rising economic inequality, the lingering impact of the Great Recession, and escalating rates of obesity and opioid addiction, among other factors, may contribute to even greater disparities between the haves and the have-nots in future cohorts of older adults. She concludes that policies, such as income supplements for the poorest older adults, expanded paid family leave, and universal health care could ameliorate or even reverse some disparities.

A comprehensive analysis of the causes and consequences of later-life inequalities, Golden Years? demonstrates the importance of increased awareness, strong public initiatives, and creative community-based programs in ensuring that all Americans have an opportunity to age well.
AUTHOR BIOGRAPHY
Deborah Carr is professor and chair of sociology at Boston University.
TABLE OF CONTENTS
Contents
List of Illustrations
About the Author
Acknowledgments
Chapter 1. Golden Years? An Introduction
Chapter 2. Older Adults in the Contemporary United States: A Snapshot
Chapter 3. Life-Course Perspectives on Social Inequalities in Later Life: A Brief Overview
Chapter 4. The Fit and the Frail: Physical Health Among Older Adults
Chapter 5. The Satisfied and the Sorrowful: The Mental Health of Older Adults
Chapter 6. The Loved and the Lonely: Social Relationships and Isolation in Later Life
Chapter 7. The Home Front: Residential and Community Experiences of Older Adults
Chapter 8. Is Death the Great Equalizer? Disparities in Dying
Chapter 9. Conclusion: Future Trends and Policy Considerations for the Twenty-First Century
Notes
References
Index