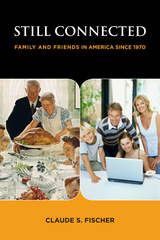 National news reports periodically proclaim that American life is lonelier than ever, and new books on the subject with titles like Bowling Alone generate considerable anxiety about the declining quality of Americans' social ties. Still Connected challenges such concerns by asking a simple yet significant question: have Americans' bonds with family and friends changed since the 1970s, and, if so, how? Noted sociologist Claude Fischer examines long-term trends in family ties and friendships and paints an insightful and ultimately reassuring portrait of Americans' personal relationships. Still Connected analyzes forty years of survey research to address whether and how Americans' personal ties have changed—their involvement with relatives, the number of friends they have and their contacts with those friends, the amount of practical and emotional support they are able to count on, and how emotionally tied they feel to these relationships. The book shows that Americans today have fewer relatives than they did forty years ago and that formal gatherings have declined over the decades—at least partially as a result of later marriages and more women in the work force. Yet neither the overall quantity of personal relationships nor, more importantly, the quality of those relationships has diminished. Americans' contact with relatives and friends, as well as their feelings of emotional connectedness, has changed relatively little since the 1970s. Although Americans are marrying later and single people feel lonely, few Americans report being socially isolated and the percentage who do has not really increased. Fischer maintains that this constancy testifies to the value Americans place on family and friends and to their willingness to adapt to changing circumstances in ways that sustain their social connections. For example, children now often have schedules as busy as their parents. Yet today's parents spend more quality time with their children than parents did forty years ago—although less in the form of organized home activities and more in the form of accompanying them to play dates or sports activities. And those family meals at home that seem to be disappearing? While survey research shows that families dine at home together less often, it also shows that they dine out together more often. Americans are fascinated by the quality of their relationships with family and friends and whether these bonds fray or remain stable over time. With so many voices heralding the demise of personal relationships, it's no wonder that confusion on this topic abounds. An engrossing and accessible social history, Still Connected brings a much-needed note of clarity to the discussion. Americans' personal ties, this book assures us, remain strong.
AUTHOR BIOGRAPHY
CLAUDE S. FISCHER is professor of sociology at the University of California, Berkeley.
TABLE OF CONTENTS
Title Page
Copyright
Dedication
Contents
About the Author
Preface
Acknowledgments
1. Alone in America? The Issue at Stake
2. Studying Personal Networks
3. Counting People: Family
4. Counting People: Friends and Others
5. Counting on People
6. Feeling Connected
7. Conclusions and Speculations
Appendix: Data Sources
Notes
References
Index