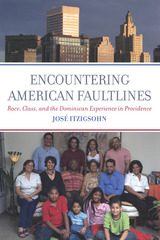 The descendents of twentieth-century southern and central European immigrants successfully assimilated into mainstream American culture and generally achieved economic parity with other Americans within several generations. So far, that is not the case with recent immigrants from Latin America and the Caribbean. A compelling case study of first- and second-generation Dominicans in Providence, Rhode Island, Encountering American Faultlines suggests that even as immigrants and their children increasingly participate in American life and culture, racialization and social polarization remain key obstacles to further progress. Encountering American Faultlines uses occupational and socioeconomic data and in-depth interviews to address key questions about the challenges Dominicans encounter in American society. What is their position in the American socioeconomic structure? What occupations do first- and second-generation Dominicans hold as they enter the workforce? How do Dominican families fare economically? How do Dominicans identify themselves in the American racial and ethnic landscape? The first generation works largely in what is left of Providence's declining manufacturing industry. Second-generation Dominicans do better than their parents economically, but even as some are able to enter middle-class occupations, the majority remains in the service-sector working class. José Itzigsohn suggests that the third generation will likely continue this pattern of stratification, and he worries that the chances for further economic advancement in the next generation may be seriously in doubt. While transnational involvement is important to first-generation Dominicans, the second generation concentrates more on life in the United States and empowering their local communities. Itzigsohn ties this to the second generation's tendency to embrace panethnic identities. Panethnic identity provides Dominicans with choices that defy strict American racial categories and enables them to build political coalitions across multiple ethnicities. This intimate study of the Dominican immigrant experience proposes an innovative theoretical approach to look at the contemporary forms and meanings of becoming American. José Itzigsohn acknowledges the social exclusion and racialization encountered by the Dominican population, but he observes that, by developing their own group identities and engaging in collective action and institution building at the local level, Dominicans can distinguish themselves and make inroads into American society. But Encountering American Faultlines also finds that hard work and hope have less to do with their social mobility than the existing economic and racial structures of U.S. society.
AUTHOR BIOGRAPHY
JOSÉ ITZIGSOHN is associate professor of sociology at Brown University.
TABLE OF CONTENTS
Contents
About the Author
Acknowledgments
Part I. Introduction
1. Immigration and American Society
2. Dominican Providence
Part II. Class, Race, and Mobility
3. In a Land of Opportunities?
4. Entering the Mainstream?
5. Upward Mobility?
Part III. Incorporation and Identity Formation
6. American Identities
7. Transnational Identities
8. Panethnic Identities
Part IV. Conclusion
9. Becoming American
Notes
References
Index
AWARDS