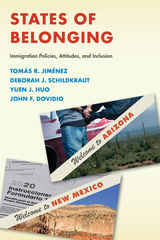 Political turmoil surrounding immigration at the federal level and the inability of Congress to pass comprehensive immigration reform have provided an opening for state and local governments to become more active in setting their own immigration-related policies. States largely dictate the resources, institutions, and opportunities immigrants can access: who can get a driver’s license or attend a state university, what languages are spoken in schools and public offices, how law enforcement interacts with the public, and even what schools teach students about history. In States of Belonging, an interdisciplinary team of immigration experts – Tomás R. Jiménez, Deborah J. Schildkraut, Yuen J. Huo, and John F.  Dovidio – explore the interconnections among immigration policies, attitudes about immigrants and immigration, and sense of belonging in two neighboring states – Arizona and New Mexico – with divergent approaches to welcoming newcomers.

Arizona and New Mexico are historically and demographically similar, but they differ in their immigration policies. Arizona has enacted unwelcoming policies towards immigrants, restricting the access of immigrants to state resources, social services, and public institutions. New Mexico is more welcoming, actively seeking to protect the rights of immigrants and extending access to state resources and institutions. The authors draw on an original survey and in-depth interviews of a cross-section of each state’s population to illustrate how these differing approaches affect the sense of belonging not only among immigrants, but among the U.S.-born as well.

Respondents in Arizona, regardless of whether they were foreign- or native-born or their ethno-racial background, agreed that the state is unwelcoming to immigrants, and they pointed to Arizona’s restrictive policies as the primary factor. The sense of rejection perceived by Latinos in Arizona, including the foreign-born and the U.S.-born, was profound. They felt the effects of administrative and symbolic exclusions of the state’s unwelcoming policies as they went about their daily lives.

New Mexico’s more welcoming approach had positive effects on the Latino immigrant population, and these policies contributed to an increased sense of belonging among U.S.-born Latinos and U.S.-born whites as well. The authors show that exposure to information about welcoming policies is associated with an improved sense of belonging across most population groups. They also find that the primary dividing line when it came to reactions to welcoming policies was political, not ethno-racial. Only self-identified Republicans, Latino as well as white, showed reduced feelings of belonging.

States of Belonging demonstrates that welcoming policies cultivate a greater sense of belonging for immigrants and other state citizens, suggesting that policies aimed at helping immigrants gain a social, economic, and political foothold in this country can pay a broad societal dividend.

REVIEWS
“Bringing together the wisdom of sociology, political science, and psychology, States of Belonging finds that state level policies towards immigrants can affect a sense of belonging not only for immigrants but for native born citizens as well.  Utilizing state of the art mixed empirical methods including surveys, experiments, and in-depth interviews, this brilliant study shows that state-level policies can have far reaching consequences. The surprising lessons these authors draw from Arizona and New Mexico are important ones for all Americans.”


“States of Belonging is a stellar example of collaborative social science research, bringing together experts from sociology, political science, and social psychology to address a critical policy question:  How do a state’s immigration policies affect the lived experience of its residents, both immigrant and U.S.-born? Focusing on Arizona and New Mexico as two contrasting immigration climates, the authors smoothly and skillfully weave together historical context, contemporary policies, experimental data, and subjective reports to show how specific state policies, immigration attitudes, and a personal sense of belonging to state and nation are closely intertwined. Their conclusion that a desire for shared citizenship outweighs presumed differences based on political party or ethnic group is an important message for us to hear, and their case for immigration reform is persuasive and timely.”


“If you’ve ever desired a book about immigrant incorporation that is psychologically nuanced, sociologically informed, and politically relevant, States of Belonging is the book for you. Gracefully written by a quartet of leading social scientists, this book provides us with new and revealing insights about the sense of belonging experienced by immigrants and their descendants—and the essential role that individual states play in this process through their own responses to immigration. What is more, they show readers that non-Hispanic whites are also significantly impacted by the degree to which immigrants and their families are welcomed or not by their own state, thus demonstrating a more complicated and often overlooked dynamic in white-Latino relations. Methodologically meticulous and displaying an impressive theoretical range, this volume is likely to change many minds about the extent to which the incorporation of immigrants has implications for us all. It certainly changed mine.”