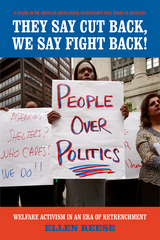 In 1996, President Bill Clinton hailed the "end of welfare as we know it" when he signed the Personal Responsibility and Work Opportunity Act. The law effectively transformed the nation's welfare system from an entitlement to a work-based one, instituting new time limits on welfare payments and restrictions on public assistance for legal immigrants. In They Say Cutback, We Say Fight Back, Ellen Reese offers a timely review of welfare reform and its controversial design, now sorely tested in the aftermath of the Great Recession. The book also chronicles the largely untold story of a new grassroots coalition that opposed the law and continues to challenge and reshape its legacy. While most accounts of welfare policy highlight themes of race, class and gender, They Say Cutback examines how welfare recipients and their allies contested welfare reform from the bottom-up. Using in-depth case studies of campaigns in Wisconsin and California, Reese argues that a crucial phase in policymaking unfolded after the bill's passage. As counties and states set out to redesign their welfare programs, activists scored significant victories by lobbying officials at different levels of American government through media outreach, protests and organizing. Such efforts tended to enjoy more success when based on broad coalitions that cut across race and class, drawing together a shifting alliance of immigrants, public sector unions, feminists, and the poor. The book tracks the tensions and strategies of this unwieldy group brought together inadvertently by their opposition to four major aspects of welfare reform: immigrants' benefits, welfare-to-work policies, privatization of welfare agencies, and child care services. Success in scoring reversals was uneven and subject to local demographic, political and institutional factors. In California, for example, workfare policies created a large and concentrated pool of new workers that public sector unions could organize in campaigns to change policies. In Wisconsin, by contrast, such workers were scattered and largely placed in private sector jobs, leaving unions at a disadvantage. Large Latino and Asian immigrant populations in California successfully lobbied to restore access to public assistance programs, while mobilization in Wisconsin remained more limited. On the other hand, the unionization of child care providers succeeded in Wisconsin – but failed in California – because of contrasting gubernatorial politics. With vivid descriptions of the new players and alliances in each of these campaigns, Reese paints a nuanced and complex portrait of the modern American welfare state. At a time when more than 40 million Americans live in poverty, They Say Cutback offers a sobering assessment of the nation's safety net. As policymakers confront budget deficits and a new era of austerity, this book provides an authoritative guide for both scholars and activists looking for lessons to direct future efforts to change welfare policy. A Volume in the American Sociological Association's Rose Series in Sociology
AUTHOR BIOGRAPHY
ELLEN REESE is associate professor of sociology at the University of California, Riverside.
TABLE OF CONTENTS
Contents
About the Author
Acknowledgments
Chapter 1. Welfare Reform and Its Challengers
Chapter 2. Policy Implementation as Policymaking: The Case of U.S. Welfare Reform
Chapter 3. Challenging Welfare Racism: Cross-Racial Coalitions to Restore Legal Immigrants’ Benefits
Chapter 4. Battling the Welfare Profiteers: Campaigns Against Welfare Privatization
Chapter 5. Confronting the Workfare State: Community and Labor Campaigns for Workfare Workers’ Rights
Chapter 6. But Who Will Watch the Children? State and Local Campaigns to Improve Child Care Policies
Chapter 7. Challenges and Prospects for the Welfare Rights Movement
Appendix
Notes
References
Index