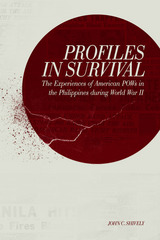 The stories of seven men and one woman from Indiana who survived the horrors of captivity under the Japanese in the Pacific during World War II are captured in vivid detail. These Hoosiers were ordered to surrender following the fall of Bataan and Corregidor in 1942. It was the largest surrender of American armed forces in U.S. history and the beginning of three years of hell starting with the infamous Bataan Death March, facing brutal conditions in POW camps in the Philippines, and horrific journeys to Japan for some onboard what came to be known as “hellships.” Former Indiana governor Edgar D. Whitcomb, one of those featured in the book, notes that the American prisoners had to endure “unimaginable misery and brutality at the hands of sadistic Japanese guards,” as they were routinely beaten and many were executed for the most minor offenses, or for mere sport. In addition to Whitcomb, those profiled include Irvin Alexander, Harry Brown, William Clark, James Duckworth, Eleanor Garen, Melvin McCoy, and Hugh Sims.
AUTHOR BIOGRAPHY
John C. Shively is a practicing physician with a longtime interest in World War II. He lives in West Lafayette, Indiana. He is the author of The Last Lieutenant: A Foxhole View of the Epic Battle for Iwo Jima, published by Indiana University Press in 2006.
TABLE OF CONTENTS
Contents
Foreword
Acknowledgments
Author’s Note
Introduction by Edgar Whitcomb
1 | The Fall of the Philippines
2 | Irvin Alexander
3 | Harry Brown
4 | William B. Clark
5 | James W. Duckworth
6 | Eleanor M. Garen
7 | Melvin McCoy
8 | Hugh Sims
9 | Edgar Whitcomb
10 | Afterword
Notes
Bibliography
Index