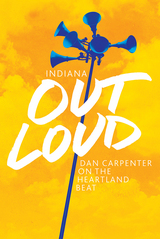 Since 1976, Dan Carpenter’s writing has appeared in the pages of the Indianapolis Star as a police reporter, book critic, and renowned op-ed columnist. In writing for the state’s largest newspaper, Carpenter has covered the life and times of some notable Hoosiers, as well as serving as a voice for the disadvantaged, sometimes exasperating the Star’s readership in central Indiana as the newspaper’s “house liberal.” Indiana Out Loud is a collection of the best of Carpenter’s work since 1993 and includes timely and engaging examinations of the lives of such intriguing people as wrestling announcer Sam Menacker, survivor of the James Jones People’s Temple massacre Catherine Hyacinth Thrash, Indianapolis African American leader Charles “Snookie” Hendricks, Atlas Grocery impresario Sid Maurer, and coaches James “Doc” Counsilman and Ray Crowe. The book also includes a healthy dose of literary figures, politicians, historians, knaves, crooks, and fools.
AUTHOR BIOGRAPHY
Dan Carpenter is an Indianapolis native and a graduate of Cathedral High School and Marquette University. In addition to his work for the Indianapolis Star, he is a published poet and author. His book Hard Pieces: Dan Carpenter’s Indiana, was published by Indiana University Press in 1993.
TABLE OF CONTENTS
Contents
Preface
1. Beneath the Noise
2. Uncommon Language
3. Uttered in the Heat
4. Songs for the Road