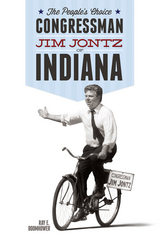 This first-ever biography of Congressman Jim Jontz examines his remarkable long-shot political career and lifetime involvement in local, state, and national environmental issues. As a liberal Democrat (he preferred the terms progressive or populist) usually running in conservative districts, Jontz had political pundits predicting his defeat in every election only to see him celebrating another victory with his happy supporters, always clad in a scruffy plaid jacket with a hood from high school that he wore for good luck. “I always hope for the best and fight for the worst,” said Jontz. He won five terms as state representative for the Twentieth District (Benton, Newton, Warren, and White Counties), served two years in the Indiana Senate, and captured three terms in the U.S. Congress representing the sprawling Fifth Congressional District in northwestern Indiana that stretched from Lake County in the north to Grant County in the south. Jontz told a reporter that his political career had always “been based on my willingness and role as a spokesman for the average citizen.” In his career Jontz also led an unsuccessful campaign to stop the passage of the North American Free Trade Agreement with the Citizens Trade Campaign, helped protect the Endangered Species Act when it was under attack in the 1990s as director of the Endangered Species Coalition, campaigned to save old-growth forests as executive director of the Western Ancient Forest Campaign, and tried to foster progressive causes as president of the Americans for Democratic Action.
AUTHOR BIOGRAPHY
Ray E. Boomhower is senior editor with the Indiana Historical Society Press, where he edits the quarterly popular history magazine Traces of Indiana and Midwestern History. His previous books have included biographies of author and Civil War general Lew Wallace, famed Hoosier war correspondent Ernie Pyle, suffragette and peace activist May Wright Sewall, World War II photographer John A. Bushemi, astronaut Gus Grissom, and U.S. Navy ace Alex Vraciu.
TABLE OF CONTENTS
Contents
Preface
1 | “A Large and Courageous Heart”
2 | An Activist’s Awakening
3 | The Dam
4 | Mr. Jontz Goes to Washington
5 | A Public Trust
6 | Fighting the Good Fight
7 | Long May You Run
8 | The Last Hurrah
Notes
Select Bibliography
Index