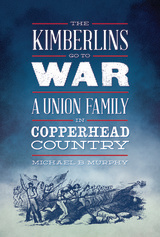 As July 7, 1861, dawned, war was in the air in Lexington, Indiana. The county seat of Scott County was abuzz with the latest news of the southern rebellion. The _Madison Daily and Evening Courier_ told of skirmishes between Federal troops and “secesh” forces at Harpers Ferry and Falling Waters, Virginia. Closer to home, word had come that William A. Sanderson had organized a new outfit, the Twenty-Third Indiana, and was recruiting throughout the Second Congressional District for men to join the regiment.

Although Scott County had been rife with sympathy and support for the South, answering the call to serve the Union cause from the county were Jacob T. Kimberlin, a twenty-one-year-old farmhand; his older brother, John J.; and his cousins, William H. H. Kimberlin, Benjamin F. Kimberlin, and James Stark. These five young men could not have known at the time that none of them would ever again see their homes. They only knew that the Kimberlins were going to war.

This is the story of the Kimberlin family that sent thirty-three fathers and sons, brothers and cousins, to fight for the Union during the Civil War. Ten family members were killed, wounded, or died of battlefield disease, a 30 percent casualty rate that is unmatched in recorded Scott County history. Of the 134 known deaths of Scott County soldiers, ten were members of the Kimberlin clan. Their feelings about the war come from forty letters to and from the battlefield that have survived to this day. The book examines such questions as: Were they fighting to save the Union or to free the slaves? How did they express grief over the loss of a brother? Did they keep up with their business and the women at home? And what did they think about “secesh” neighbors in southern Indiana who tried to undermine the Union?
AUTHOR BIOGRAPHY
Michael B. Murphy is senior vice president at Hirons and Company, an Indianapolis advertising and public relations firm, and chairman of the board at Monarch Beverage. An Indiana state representative for sixteen years, Murphy received his bachelor’s degree in American studies from the University of Notre Dame and his master’s degree in history from Indiana University–Purdue University at Indianapolis in 2009.
TABLE OF CONTENTS
Contents
Acknowledgments
Chapter 1. War Comes to Indiana
Chapter 2. Scott County Looks South to Trade
Chapter 3. Scott County Political Traditions
Chapter 4. Fighting and Dying for the Union
Chapter 5. Home and Away
Notes
Bibliography
A: Soldiers Alphabetically
B: Soldiers by Unit
C: Soldiers by Surname
D: Soldiers by Status
Index