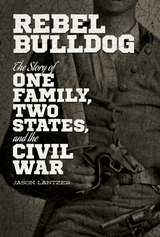 Rebel Bulldog tells the story of Preston Davidson, a Northerner who fought for the Confederacy, and his family who lived in Indiana and Virginia. It is a story that examines antebellum religion, education, reform, and politics, and how they affected the identity of not just one young man, but of a nation caught up in a civil war. Furthermore, it discusses how a native-born Hoosier reached the decision to fight for the South, while detailing a unique war experience and the postwar life of a proud Rebel who returned to the North after the guns fell silent and tried to remake his life in a very different state and nation than the ones he had left in 1860.

Using the lives of Preston and his family as a lens to help us glimpse the past, Rebel Bulldog delves into the human experience on multiple levels, asks us to reconsider what we think we know of the Civil War, and complicates, while it complements the existing literature. It is a story that perhaps could only have happened in Indiana.
AUTHOR BIOGRAPHY
JASON LANTZER is assistant director, university honors program, at Butler University in Indianapolis. He received his undergraduate, graduate, and doctoral degrees from Indiana University, Bloomington. Lantzer is the author of “Prohibition is Here to Stay”: The Reverend Edward S. Shumaker and the Dry Crusade in America (2009) and Mainline Christianity: The Past and Future of America’s Majority Faith (2012).
TABLE OF CONTENTS
Contents
Preface
Introduction
Chapter 1. The Family
Chapter 2. The College and the Impending Crisis
Chapter 3. Going South
Chapter 4. Constitutional Union or Secession?
Chapter 5. Failure of Compromise and the Shattered Union
Chapter 6. The Wages of War
Chapter 7. Torn Asunder
Chapter 8. Seeking Peace
Notes
Bibliography
Index