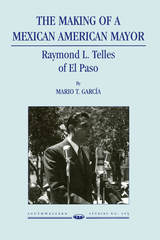 The Making of a Mexican American Mayor
by Mario Garcia
University of Arizona Press, 1999
Paper: 978-0-87404-276-4
Raymond Telles was the first Mexican American mayor of El Paso, Texas, and the most significant Mexican American of his time. This book details his political career from 1948, when he won a hotly contested election for county clerk, to his ambassadorship to Costa Rica.