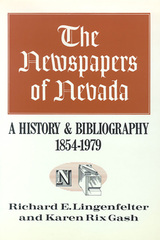 This new bibliography of Nevada's newspapers supersedes and greatly expands on previous works. More than 800 publications are now included: traditional newspapers, penny shoppers, comic and campaign sheets, entertainment and matrimonial guides, and fictitious newspapers that had life only in the columns of other papers. Also included is a brief appendix of early newspapers from boarder states that reported regularly on Nevada. The authors have provided a brief historical sketch of each publication, together with a list and location of known copies of the original papers, plus current microfilm holdings. The bibliography also documents frequency of publication, proprietorship, title changes, printing locations, and political affiliation. This volume will be of value to historians ranging from scholars to genealogy buffs who need access to the information only newspapers can provide.