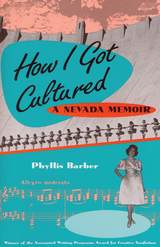 BUY
How I Got Cultured: A Nevada Memoir
by Phyllis Barber
University of Nevada Press, 1994
Paper: 978-0-87417-233-1
Phyllis Barber grew up in Las Vegas, in the midst of a devout Mormon family. As a small child, she began to feel uneasy with her faith's all-pervasive certainty and righteousness. As she grew, the tensions between her religious beliefs and her desire for a larger, more cultured life also grew. She studied piano and dance, performed with a high school precision dance team, worked as an accompanist in a ballet studio and as a model.

How I Got Cultured is a moving, candid, and sometimes hilarious account of an American adolescence, negotiated between the strictures of a demanding faith and the allures of one of the most flamboyant cities in the world.

AUTHOR BIOGRAPHY
Phyllis Barber was born in Nevada and grew up in Boulder City and Las Vegas. She can trace her family's Nevada roots to the 1860s. Trained as a classical pianist, she has served on the Board of Directors for the Utah Symphony. She has also worked as a features writer and teacher. She received a Master of Fine Arts degree in creative writing from Vermont College. Her memoir, How I Got Cultured, won the 1991 Association of Writers & Writing Programs Prize for Creative Nonfiction and the 1993 Award for Best Autobiography from the Association of Mormon Letters. She teaches in the Vermont College of Fine Arts MFA Writing Program and lives in Denver. She was inducted into the Nevada Writers Hall of Fame in 2005.
REQUEST ACCESSIBLE FILE