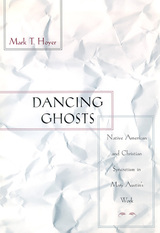 A significant and innovative contribution to Austin studies. How did an Illinois Methodist homesteader in the West come to create one of the most significant cosmological syntheses in American literature? In this study, Hoyer draws on his own knowledge of biblical religion and Native American cultures to explore Austin's creation of the "mythology of the American continent" she so valued. Austin lived in and wrote about "the land of little rain," semiarid and arid parts of California and Nevada that were home to the Northern Paiute, Shoshone, Interior Chumash, and Yokut peoples. Hoyer makes new and provocative connections between Austin and spiritual figures like Wovoka, the prophet of the Ghost Dance religion, and writers like Zitkala-sa and Mourning Dove, and he provides a particularly fine reading of Cogowea.

Mark Hoyer is the Chair of Critical Perspectives in the School of Extended Education at Saint Mary's College of California.