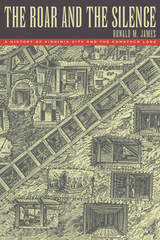 Nevada’s Comstock Mining District has been the focus of legend since it first burst into international prominence in the late 1850s, and its principal settlement, Virginia City, endures in the popular mind as the West’s quintessential mining camp. But the authentic history of the Comstock is far more complex and interesting than its colorful image. Contrary to legend, Virginia City spent only its first few years as a ramshackle mining camp. The mining boom quickly turned it into a thriving urban center, at its peak one of the largest cities west of the Mississippi, replete with most of the amenities of any large city of its time.
The lure of the area’s fabulous wealth attracted a remarkably heterogenous population from around the world and offered employment to dozens of trades and thousands of people, both men and women, representing every one of the region’s diverse ethnic groups.
Ronald James’s brilliant account of the Comstock’s long and eventful history—the first comprehensive study of the subject in over a century—examines every aspect of the region and employs information gleaned from hundreds of written sources, interviews, archeological research, computer analysis, folklore, gender studies, physical geography, and architectural and art history, as well as over fifty rare photographs, many of them previously unpublished.
AUTHOR BIOGRAPHY
Ronald M. Jamesis the author or co-author of ten books, and he received the Wilbur S. Shepperson Humanities Book Award in 1998. His articles on history, folklore, and archaeology have appeared in six countries, and he has lectured on western history throughout the nation. James also lectures occasionally at the University of Nevada, Reno in history and folklore. He is the chairman of the National Historic Landmarks Committee for the National Park Service, and he served as Nevada’s State Historic Preservation Officer for three decades.
TABLE OF CONTENTS


List of Illustrations
List of Tables
Acknowledgments
Introduction
The Glimmer of Opportunity: The Setting
The First Boom: Building the Community
The First Boom: Building the Mines
Grief, Depression, and Disasters: Successes in the Midst of Failures
A Time of Bonanza
The Workers: Labor in an Industrialized Community
The International Community: Ethnicity Celebrated
The Moral Options: Sinners
The Moral Options: Saints
Princes and Paupers: Contrasts in Class
Over Time: Bonanza and Borrasca (1877-1942)
The Sequel to the Big Bonanza: Tourism and Television
Afterword
Notes
Bibliography
Index