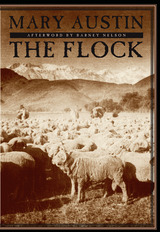 This classic novel, first published in 1906 and based on Mary Austin's own experiences, captures the way of life of shepherds in the Sierra. Austin blends natural history, politics, and allegory in a genre-blurring narrative, championing local shepherds in their losing battle against the quickly developing tourist business in the Western Sierra during the nineteenth century. Austin had met many shepherds while visiting the Tejon ranches of Edward Beale and Henry Miller, and cultivated relationships with men others often thought of as ignorant, unambitious, and dirty, listening closely to their stories. Her neighbors were scandalized, but Austin respected the shepherds’ ways of thinking. Rather than portray these shepherds’ lives as part of a romantic bygone era, in this novel, she instead positions them as exemplifying potentially radical ways of living in and thinking about the world. Afterword by Barney Nelson.
AUTHOR BIOGRAPHY
Mary Austin (1868-1934) wrote more than 30 books during her career, including Land of Little Rain(1903) and Lost Borders (1909). Born in Carlinsville, Illinois, Mary Austin eventually ventured west with her brother and widowed mother to homestead in California. Throughout her essays, poems, plays, and stories, she focused on environmental issues and the relationship between individual experience and cultural histories.
TABLE OF CONTENTS
Cover Page
Title Page
Copyright Page
Table of Contents
I. The Coming of the Flocks
II. The Sun in Aries
III. A Shearing
IV. The Hireling Shepherd
V. The Long Trail
VI. The Open Range
VII. The Flock
VIII. The Go-Betweens
IX. The Strife of the Herdsmen
X. Liers-in-Wait
XI. The Sheep and the Reserves
XII. Ranchos Tejon
XIII. The Shade of the Arrows
Afterword by Barney Nelson
Notes
Works Cited
CIP Data
REQUEST ACCESSIBLE FILE