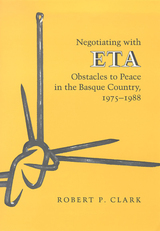 Since the late 1960s, the Basque insurgent organization ETA (Euzkadi ta Askatasuna, or Basque Homeland and Freedom) has been engaged in a violent struggle against the Spanish state in an effort to gain the independence of the Basque Country. ETA violence has led to the death of hundreds of people, making the organization the most violent insurgent group in Europe. Between 1975 and 1988, nearly thirty attempts to negotiate an end to violence, with a few limited exceptions, all ended in failure. This important book examines why the efforts to negotiate have failed and makes suggestions on how to improve the chances for successful discussion in the future. Although Clark does not disprove the conventional wisdom that negotiation with terrorists is a bad idea, he does begin from the opposing point of view that there may be some positive values to be realized from such negotiation.Negotiating with ETA describes the various factions that are interested in the outcome of such negotiations and the Spanish antiterrorist policy throughout the period under examination. The book also recounts the early attempts to negotiate, the first attempt at "social reintegration," various attempts by the Basque Government to get negotiations started, negotiation efforts under the Spanish socialist government of Felipe González, and the lengthy negotiations that took place in Algeria. A wide range of scholars and specialists will find this book valuable, including those interested in contemporary Spanish politics, ethnic nationalism, Basque affairs, the problem of terrorism, and conflict resolution.

Robert P. Clark is a renowned expert on the Basque situation and on radical politics.