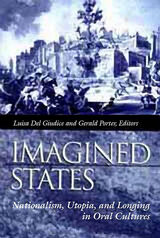 An international ensemble of folklore scholars looks at varied ways in which national and ethnic groups have traditionally and creatively used imagined states of existence-some idealizations, some demonizations-in the construction of identities for themselves and for others. Drawing on oral traditions, especially as represented in traditional ballads, broadsides, and tale collections, the contributors consider fertile landscapes of the mind where utopias overflow with bliss and abundance, stereotyped national and ethnic caricatures define the lives of "others," nostalgia glorifies home and occupation, and idealized and mythological animals serve as cultural icons and guideposts to harmonious social life.
TABLE OF CONTENTS
Contents
Introduction
Idealized States
Mountains of Cheese and Rivers of Wine: Paesi di Cuccagna and Other Gastronomic Utopias
Prefaced Space: Tales of the Colonial British Collectors of Indian Folklore
Working the Railways, Constructing Navvy Identity
Demonized States
“Who Talks of My Nation?” The Role of Wales, Scotland, and Ireland in Constructing “Englishness”
The Turkish German Self: Displacing German-German Conflict in Orientalist Street Ballads
Embodied States
Bovine Bodies and the Domestication of the Human Mind
“The Poppy Blossom from My Native Land” The Married Woman as Exile in Latvian Folk Poetry
Contributors
Index
REQUEST ACCESSIBLE FILE