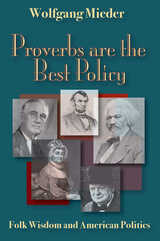 Wolfgang Mieder, widely considered the world’s greatest proverb scholar, here considers the role of proverbial speech on the American political stage from the Revolutionary War to the present. He begins his survey by discussing the origins and characteristics American proverbs and their spread across the globe hand in hand with America’s international political role. He then looks at the history of the defining proverb of American democracy, "government of the people, by the people, for the people." Subsequent essays consider such matters as Abigail Adams’s masterful use of politically charged proverbs; the conversion of the biblical proverb "a house divided against itself cannot stand" into a political expression; Frederick Douglass’s proverbial prowess in the battle against racial injustice; how United States presidents have employed proverbial speech in their inaugural addresses; and the proverbial language in the World War II correspondence between Franklin Roosevelt and Winston Churchill, which sharpened their communication and helped forge bonds of cooperation. Mieder concludes with an insightful, relevant examination of the significance of the ambiguous proverb "good fences make good neighbors."

Wolfgang Mieder is the author of, among many other books, the Encyclopedia of World Proverbs, Proverbs Are Never Out of Season: Popular Wisdom in the Modern Age, and Proverbs: A Handbook. He is alsothe editor in chief of A Dictionary of American Proverbs; and the founding editor of Proverbium: Yearbook of International Proverb Scholarship. As Proverbs Are the Best Policy shows, he has brought particular understanding to the uses of proverbs in politics