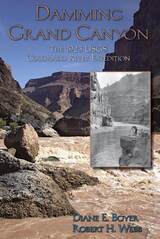 In 1923, America paid close attention, via special radio broadcasts, newspaper headlines, and cover stories in popular magazines, as a government party descended the Colorado to survey Grand Canyon. Fifty years after John Wesley Powell's journey, the canyon still had an aura of mystery and extreme danger. At one point, the party was thought lost in a flood.

Something important besides adventure was going on. Led by Claude Birdseye and including colorful characters such as early river-runner Emery Kolb, popular writer Lewis Freeman, and hydraulic engineer Eugene La Rue, the expedition not only made the first accurate survey of the river gorge but sought to decide the canyon's fate. The primary goal was to determine the best places to dam the Grand. With Boulder Dam not yet built, the USGS, especially La Rue, contested with the Bureau of Reclamation over how best to develop the Colorado River. The survey party played a major role in what was known and thought about Grand Canyon.

The authors weave a narrative from the party's firsthand accounts and frame it with a thorough history of water politics and development and the Colorado River. The recommended dams were not built, but the survey both provided base data that stood the test of time and helped define Grand Canyon in the popular imagination.

AUTHOR BIOGRAPHY
Diane Boyer is an archivist working for the U.S. Geological Survey's Desert Laboratory Collection of Repeat Photography in Tucson, Arizona. She has published several articles, most of which deal with Grand Canyon and Colorado River history.

Robert Webb has worked on long-term changes in natural ecosystems of the southwestern United States since 1976. He is a research hydrologist with the U.S. Geological Survey and has authored, co-authored, or edited nine books, including Grand Canyon: A Century of Change.
REVIEWS

Provides magnificent background on Colorado River water development. . . . It is also an adventure story of coping with the elements while accomplishing the complex surveying required. W. L. Rusho, author of Lee's Ferry and Everett Reuss