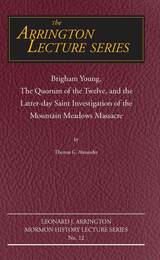 On September 11, 1857, a wagon train of emigrants passing through the Utah Territory on their way to California were massacred at Mountain Meadows. Although today’s historians agree that the principal perpetrators were members of the Mormon militia in southern Utah, how much the central Mormon leadership, especially Brigham Young at the top, knew about the massacre, when and how they learned about it, and the extent of a cover up afterward are still matters of controversy and debate.

In this 12th volume of the Arrington Lecture Series, Thomas Alexander (Lemuel  Redd Professor of Western American History, Emeritus, at Brigham Young University), asserts that Brigham Young and the LDS Church’s governing Quorum of Twelve made timely and diligent efforts to investigate the massacre and encouraged legal proceedings but were hindered by federal  territorial officials and lied to by massacre participant John D. Lee, preventing Young from learning the full truth for many years.