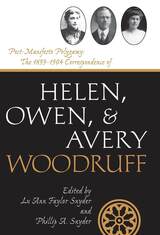 These letters among two women and their husband offer a rare look into the personal dynamics of an LDS polygamous relationship. Abraham “Owen” Woodruff was a young Mormon apostle, the son of President Wilford Woodruff, remembered for the Woodruff Manifesto, which called for the divinely inspired termination of plural marriage. It eased a systematic federal judicial assault on Mormons and made Utah statehood possible. It did not end polygamy in the church. Some leaders continued to encourage and perform such marriages. Owen Woodruff himself contracted a secretive, second marriage to Avery Clark. Pressure on the LDS church revived with hearings regarding Reed Smoot’s seat in the U. S. Senate. After church president Joseph F. Smith issued the so-called Second Manifesto in 1904, polygamy and its more prominent advocates were mostly expunged from mainstream Mormonism. Owen Woodruff was not excommunicated, as a couple of his apostolic colleagues were. He and his first wife, Helen May Winters, had died suddenly that same year after contracting smallpox in Mexico. Owen Woodruff had often been “on the underground,” moving frequently, traveling under secret identities, and using code names in his letters to his wives, while still carrying out his administrative duties, which, in particular, involved supervision of the nascent Mormon colonies in the Big Horn Basin of Wyoming.