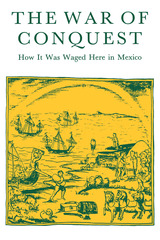 War Of Conquest: How it was Waged Here in Mexico
by Arthur J. O. Anderson
University of Utah Press, 1978
Paper: 978-0-87480-192-7
How is it possible that in 1521 five-hundred Spanish soldiers defeated the most powerful military force in Middle America? The answer lies not in western firearms, as we have been taught, but rather in the differences between the Aztec and Spanish cultures. Differing concepts of warfare and diplomacy, reinforced by tensions and stresses within the Aztec political system and its supporting religious beliefs, allowed Cortés to systematically gain and hold the military and diplomatic advantages that gave the Spaniards the day, the war, and the continent.
AUTHOR BIOGRAPHY
Charles E. Dibble (1909–2002) was an anthropologist, linguist, and scholar specializing in Mesoamerican cultures. He received his master’s and doctorate degrees from the Universidad Nacional Autónomo de México and taught at the University of Utah from 1939–1978, where he became a Distinguished Professor of Anthropology.

Arthur J. O. Anderson (1907–1996) was an anthropologist specializing in Aztec culture and language. He received his MA from Claremont College and his PhD in anthropology from the University of Southern California. He was a curator of history and director of publications at the Museum of New Mexico in Santa Fe and taught at a number of institutions, including San Diego State University, from which he retired.
TABLE OF CONTENTS


Introduction To the Reader, by Fray Bernardino de Sahagún Map of the Route of Cortés and His Allies 1. Prelude of Evil Signs 2. The Landings 3. The March of Mexico Map of Tenochtitlan and Tlatilulco 4. The Capture and Death of Moctezuma 5. The Escape of the Spaniards 6. The Return of the Spaniards 7. Mexico Under Siege 8. The Beginning of the End 9. The End Epilogue