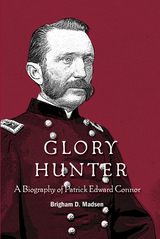 The life of Patrick Edward Connor serves as a half-century slice of western American history. After leaving New York City, where he had arrived at the age of twelve as a poor Irish immigrant, the nineteen-year-old youth joined the U.S. Army in 1839. He fought in the war with Mexico and then joined the gold rush in California until marrying and settling down in Stockton in 1854.

The Civil War found him volunteering again, this time as colonel of California troops sent to the Utah Territory to protect the mail lines from Indian attacks. Bitterly anti-Mormon, Connor spent the war years alternately engaging in a war of words with Brigham Young or in fighting Indians in northern Utah and present-day Wyoming. After the Civil War, ex-Major General Connor began mining operations in Utah and Nevada, ventures that went from boom to bust. He spent his final years in straitened financial circumstances.

Patrick Edward Connor was a “Man of the West,” possessing both its prejudices and its democratic, independent spirit. His greatest success lay as a military leader, and he would have agreed that he was made for war, not peace. He left an imprint on the history of the American West, remembered as the founder of Fort Douglas, as the “first gentile in Utah,” the “father of Utah mining,” and the “father of the Liberal Party in Utah.”

Brigham D. Madsen (1914–2010) was professor of history at the University of Utah. He authored eight books, including The Shoshoni Frontier and the Bear River Massacre (University of Utah, 1985), and he co-authored, edited, and contributed to numerous other works.