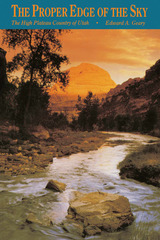 Edward Geary’s collection of writings on the High Plateau country of central and southern Utah, a combination guidebook, travel narrative, personal essays, and natural, social, and literary history, encompasses each of those forms with a sweep as broad as the landscape it describes.

It traces the progress of travelers to the region, including the historic Dominguez-Escalante party in 1776, and trappers and explorers such as Jedediah Smith, John C. Freemont, and Kit Carson. Scandinavian and English descendants of the early Mormon pioneers, sent to settle Manti and surrounding areas by Brigham Young in 1849, populate many of the pages and dominate the agrarian villages described by the author. The book also describes the multiethnic society of French Basque, Greeks, Slavs, Italians, Chinese, Welsh, and Finnish laborers and coal miners that developed in the region.

Geary writes of all these people with affection and a deep sense of place, of belonging to a distinctive landscape and its history. It is a book that will bring a rush of understanding to those who have lived in the High Plateaus and greater depth of appreciation to visitors.

Edward A. Geary was born in Huntington, Utah, a small town in the heart of the High Plateau country.

Introduction
1. A Strange and Beautiful Company
2. South of Nebo
3. The Mormon Corridor
4. The Inner Valleys
5. Stop and Tell Me, Red Man
6. Streams Ever Copious
7. A Wife from Sanpete County
8. Valley at the World's End
9. The Backhouses of Escalante
10. A Woman and Some Cows
11. The Camps
12. For the Strength of the Hills
Notes
Index