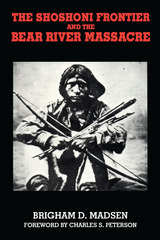 In January 1863 over two hundred Shoshoni men, women, and children died on the banks of the Bear River at the hands of volunteer soldiers from California. Bear River was one of the largest Indian massacres in the Trans-Mississippi West, yet the massacre has gone almost unnoticed as it occurred during a time when national attention was focused on the Civil War, and the deaths of the Shoshoni Indians in a remote corner of the West was of only passing interest.  Bear River was the culmination of events from nearly two decades of Indian-white interaction. The Shoshoni homelands encompassed a huge expanse of territory and were traversed by the main paths of western travel, forcing Indian-white encounters. Initially friendly and accommodating to white travelers in the 1840s, by the late 1850s resentment soared among the Indians as they were killed and their food stocks were consumed by emigrants and their livestock. The process of white appropriation of Indian lands reached crisis proportions in the Far West and Great Basin before it did on the Great Plains. In the historiography of western Indians, few have appreciated the role of tribes inhabiting the regions of along the Oregon and California Trails. Madsen makes a compelling argument that precedents were established that were followed again and again on subsequent western Indian frontiers, offering a new view of early encounters in the Trans-Mississippi West. This detailed narrative of the events and conflicts that culminated in the massacre remains the definitive account of this bloody chapter in United States-Native American relations.
AUTHOR BIOGRAPHY
Brigham D. Madsen (1914–2010) was professor of history at the University of Utah. He authored eight books, including Glory Hunter: A Biography of Patrick Edward Conner (University of Utah, 1990), and he co-authored, edited, and contributed to numerous other works.
TABLE OF CONTENTS


Foreword by Charles S. Peterson Preface List of Important Events in Shoshoni History, 1840–64 1. Introduction 2. Mormons and Forty-niners Invade Shoshoni Country 3. Early Territorial Supervision of Indian Affairs 4. The Ward Attack and Continuing Starvation 5. The Utah War and the Mountain Meadows Massacre 6. Mounting Tension Along the Trails 7. Battle of Pyramid Lake and the Otter Party Tragedy 8. The Overland Mail Lines Comes Under Attack 9. The California Volunteers Arrive 10. From Battle to Massacre 11. The Last Years of the Shoshoni Frontier Appendix A: Casualties from the Battle of Bear River Appendix B: Massacre at Boa Ogoi Notes Bibliography Index