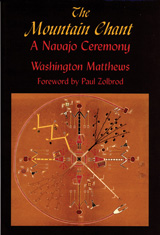 The Mountain Chant is a nine-day Navajo healing ceremony, one of several major rites undertaken only in winter. Aside from curing disease, it brings rain and invokes the unseen powers for general benefit. Though perhaps practiced less often now than better-known ceremonies such as the Night Chant, it is by no means forgotten.

Fully faithful to the original book published by Washington Matthews over a century ago, this edition contains the story of the wandering hero upon whose exploits the Mountain Chant is based, a description of each of the nine ceremonial days, and original song text and translations.

"Each Navajo ceremony builds on a specific story, which in turn contributes to a network of interlocking narratives as poetically rich as the Homeric epics or the Arthurian cycle. Non-Navajos are only now beginning to fathom the extent of that poetic richness as we learn more about the nature of ceremonial Navajo, with its formulaic virtuosity, its rhythmic cadences, its deep allusiveness to enduring human values, and the spellbinding thrust of its stories."
- Paul Zolbrod, from the foreword

Washington Matthews (1843-1905), an army major and surgeon, was conversant in Navajo and was one of the earliest and best Anglo recorders of Navajo culture.

List of Illustrations
Foreword by Paul Zolbrod
Note on the Orthography of Navajo Words by Washington Matthews
Orthographic Note by Robert W. Young
Introduction
Myth of the Origin of the Dsilyídje qaçàl
The Great Pictures of Dsilyídje qaçàl
Original Texts and Translations of Songs
Addendum: The Suppressed Sections