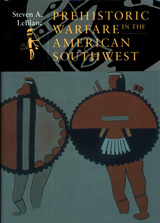 Massacres, raiding parties, ambush, pillage, scalping, captive taking: the things we know and sometimes dread to admit occur during times of war all happened in the prehistoric Southwest—and there is ample archaeological evidence. Not only did it occur, but the history of the ancient Southwest cannot be understood without noting the intensity and impact of this warfare.

Most people today, including many archaeologists, view the Pueblo people of the Southwest as historically peaceful, sedentary corn farmers. Our image of the Hopis and Zunis, for example, contrasts sharply with the more nomadic Apaches whose warfare and raiding abilities are legendary. In Prehistoric Warfare in the American Southwest Steven LeBlanc demonstrates that this picture of the ancient Puebloans is highly romanticized. Taking a pan-Southwestern view of the entire prehistoric and early historic time range and considering archaeological and ethnohistorical evidence and oral traditions, he presents a different picture.

War, not peace, was commonplace and deadly throughout the prehistoric sequence. Many sites were built as fortresses, communities were destroyed, and populations massacred. The well-known abandonments of much of the Southwest were warfare related. During the late prehistoric period fighting was particularly intense, and the structure of the historic pueblo societies was heavily influenced by warfare.

Objectively sought, evidence for war and its consequences is abundant. The people of the region fought for their survival and evolved their societies to meet the demands of conflict. Ultimately, LeBlanc asserts that the warfare can be understood in terms of climate change, population growth, and their consequences.

Steven A. LeBlanc is a research associate of the Institute of Archaeology, University of California, Los Angelas.