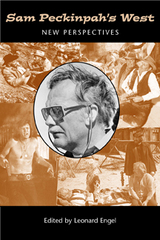 "I use violence as it is. It's ugly, brutalizing, and bloody...awful." Vilified for his violent vision of the American West as presented in films such as The Wild Bunch and Pat Garrett and Billy the Kid, the artistry of Sam Peckinpah’s work was largely overlooked in his lifetime. Dismissed by critics, he was essentially ignored in the decade following his untimely death in 1984 at the age of fifty-nine. However, with the publication of a biography in 1994 and Warner Bros.’ theatrical re-release of The Wild Bunch in 1995, Peckinpah reemerged as a distinctive voice in American film.

In Sam Peckinpah’s West eleven scholars approach the director’s oeuvre with an eye toward his minor films, touching on themes and characters previously overlooked and linking his vision to America’s literary and historical traditions. These insightful essays assure us that Peckinpah’s work will not be forgotten again, nor the vibrancy of his characters who go out "not with a whimper, nor even a bang, but a cinematic explosion that rocked Hollywood and riveted us in a way we’ll never forget."

Leonard Engel is professor of English at Quinnipiac University and the editor of The Big Empty: Essays on the Land as Narrative.