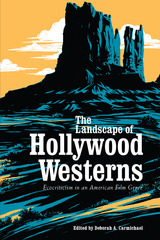 The Landscape of Hollywood Westerns: Ecocriticism in an American Film Genre
edited by Deborah A Carmichael
University of Utah Press, 2006
Paper: 978-0-87480-866-7
Films located in the American West and the Western as a cinematic genre have endured throughout the history of moviemaking. Today, this tradition of battles between good versus evil, populists versus profiteers, and man versus nature may have been largely assimilated and transformed into action adventures with car chases replacing mounted posses, yet the genre remains popular with audiences. In studies of the Hollywood Western, the importance of landscape itself, the idyllic or treacherous environment portrayed in these films, often receives supporting-role status. Without the land, however, American national mythmaking would not exist.
The essays in this volume scrutinize the special place of nature and landscape in films—including silent, documentary, and feature length film—that are specifically American and Western. The films discussed here go beyond the stereotypical sagebrush setting. Although many of the films closely fit the standard conventions of the Western, others demonstrate the fluidity of the genre. The wildness of the western environment as a central fact of the American mythos encompasses far more than a brief period of national history or a specific geographical location.
AUTHOR BIOGRAPHY
Deborah A. Carmichael is associate editor of Film & History: An Interdisciplinary Journal of Film and Television Studies. She has published on film exhibition history, Depression-era film, and documentaries.
TABLE OF CONTENTS