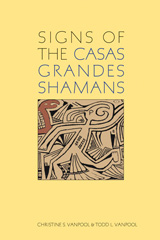 Signs of the Casas Grandes Shamans
by Christine S VanPool and Todd L VanPool
University of Utah Press, 2007
Cloth: 978-0-87480-874-2
Casas Grandes, or Paquimé, in northern Chihuahua, Mexico, was home to a religious system that swept across northern Mexico and what is now the southern United States between AD 1200 and 1450. To commemorate this religion the people of Casas Grandes created striking polychrome pots with black and red geometric and naturalistic designs on a cream base. Their pottery provides a window to Casas Grandes cosmology.
Looking through this window, authors Christine and Todd VanPool find a world centered on shamans who took spiritual journeys to consort with supernatural creatures. The shamans called upon horned serpents to bring rain, the lifeblood for farmers living in the Chihuahuan desert; dealt with snakes that held powers more potent than their bites; and raised, sacrificed, and buried macaws as ritual offerings to ensure water and fertility.
These findings challenge long-held beliefs about Southwestern religion and force a reconsideration of the importance of shamanism in the development of social differentiation in societies around the world.
AUTHOR BIOGRAPHY
Christine S. VanPool is visiting assistant professor in the Department of Anthropology at the University of Missouri, Columbia.
Todd L. VanPool is assistant professor in the Department of Anthropology at the University of Missouri, Columbia.
TABLE OF CONTENTS