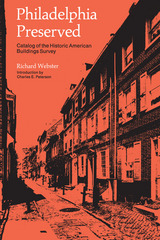 "As a key to Philadelphia's historic environment, this will become a standard work."

Today, William Penn's town is the living history of 300 years of architecture told in outstanding examples of Colonial, Federal, Italianate, and other early styles, and in the twentieth-century innovations of LeCorbusier, Kahn, and Wright. This new paperback edition updates the Historic American Buildings Survey collection, with new information on buildings lost through fire or demolition, or altered to restore the original architecture.

Organized by the traditional sections of the city, the entries include extensive physical descriptions of the structures, analyses of architecturally notable features, dates of construction, alteration, or demolition, and a new street index. The book contains more than 100 drawings, photos, and maps from the HABS collection.

"[F]rom Colonial, Federal and Italiante styles to the 20th-century innovation of LeCorbusier, Kahn, and Wright."

"A cause for celebration. The editor's introductions set each part of the city into understandable units. The book is a clearly told story of success and failure in historic preservation."

"A lovely portrait of Philadelphia's rich history of buildings."

--The Pennsylvania Magazine of History and Biography
REQUEST ACCESSIBLE FILE